So, in 2011 I knitted a wedding.  You might remember that we had a royal wedding that year….it was in one or two newspapers I believe…  Anyway, long story short, the happy couple set up a charitable fund and asked for donations rather than wedding gifts.  The charity I work for was one of the beneficiaries of the fund, and the day after that was announced, my mum and sister and I went to the Knitting & Stitching Show in London – where a new book was being launched called, you guessed it, ‘Knit Your Own Royal Wedding’.  Well it was fate, wasn’t it?

It was a lot of fun creating little woolly people (and some corgis) – we raffled the whole set for the charity so each figure that I finished was taken to the office.  We had some entertaining afternoons creating tableaux with corgis wearing the Archbishop’s mitre and other unlikely scenarios.

After I finished, Amazon very kindly let me know that the author of the royal wedding book had brought out a new book to knit a Nativity scene.  What else could it be called than ‘Knitivity’?  I (obviously) snapped it up straight away and then forgot about it as newer, shinier projects took my attention.  I did knit a few of the dolls at the beginning of 2015, with the aim of gradually doing the whole set in time for this Christmas.  All of which waffle really only leads up to the fact that the nativity set at my parents’ church, being quite old and slightly mildewy, had to be retired this year, and my mum asked me exactly how far I had got…..cue some frantic deadline knitting!  With mum’s help knitting various body pieces and clothes in the final stretch, we managed to finish the whole lot this weekend, in time for the grand installation on Christmas eve.

Here’s the whole crowd – it’s not the most in-focus picture ever, but it’s the only one I’ve managed of them all together…. 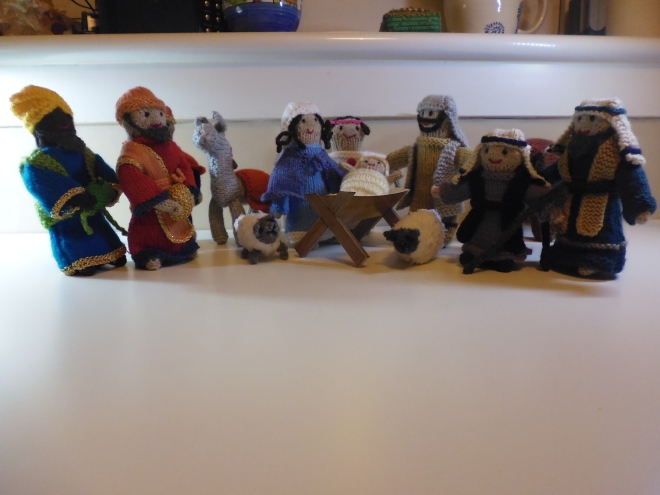 The cardboard manger comes with the book, you cut it out and glue it together.

This is going to be a pretty picture-heavy post from now on, you have to see all the dolls individually to appreciate them I think…..

Mary first, in traditional colours.  I didn’t think this was the time to go abstract and modern…..  I love her crochet curly hair and her little cape.  You can just about see the sandals embroidered onto her feet.

Joseph, complete with awesome crochet beard, moustache and sideburns…..the facial hair is my favourite part of a lot of these little characters.  It’s also amazing how two french knots and 4 red stitches turn a blob into a face…..I’m easily pleased, and I had a satisfied little chuckle every time I finished one, even though the faces are all identical…. 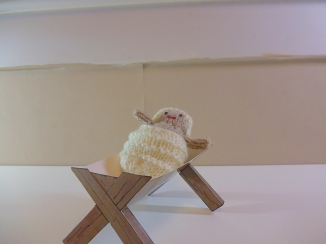 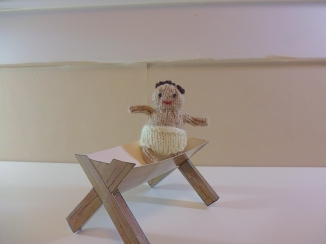 The baby Jesus – first in his swaddling cloth and then in just his pants.  I love his tiny little arms and legs. 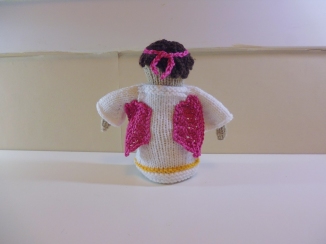 Here’s the angel, with her fab pink wings (thanks mum!) and halo.  I’ve managed to give her a slightly asymmetrical hairstyle, but I think she pulls it off…

Now we come to the animals – this is an ox, in case you were wondering….!  He was the trickiest to put together, and he did look like a strange alien blob until he got his horns, eyes and nostrils.

His face did turn out quite well in the end.

This little guy is one of my favourites – I love his jaunty ears and mane (which you can see better in the pictures below).  I’m quite tempted to knit myself a donkey just to have around… 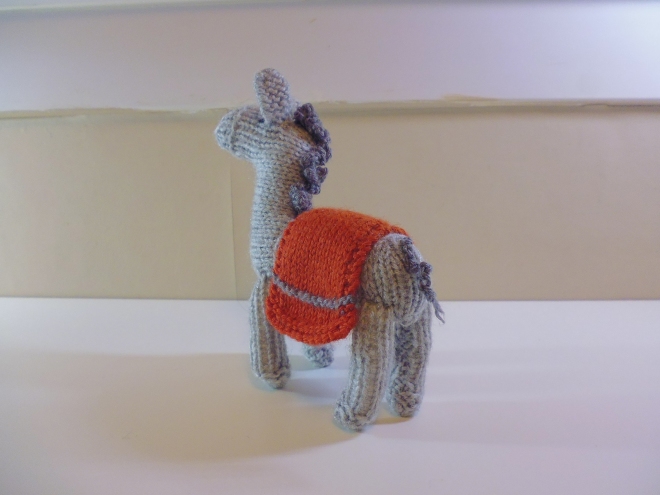 I’ve also managed to sew him together so that his head is slightly turned and tilted to one side….entirely accidental but I think it adds to the charm…

A shepherd and shepherd’s boy – these were probably the two most time consuming figures, with headdresses and belts and scarves and crooks etc…lots of sewing up / finishing time as well as just the knitting.  They’re very effective though.  The crooks are strips of knitting sewn around some heavy-weight wire which is then bent into shape.   I’ve sewn the crooks to the figures, and for all of them I’ve sewed down any headdresses and hats.  I was forever losing bits in the bag of finished figures, and with the likelihood of little fingers in church, we felt it was better that everything was securely fixed…..

Some sheep!  These are among my favourites as well, especially the wee guy with his tiny legs.  Very cute.  I’m quite tempted to knit another couple of these, I’ve got to do something with the fluffy white yarn anyway. 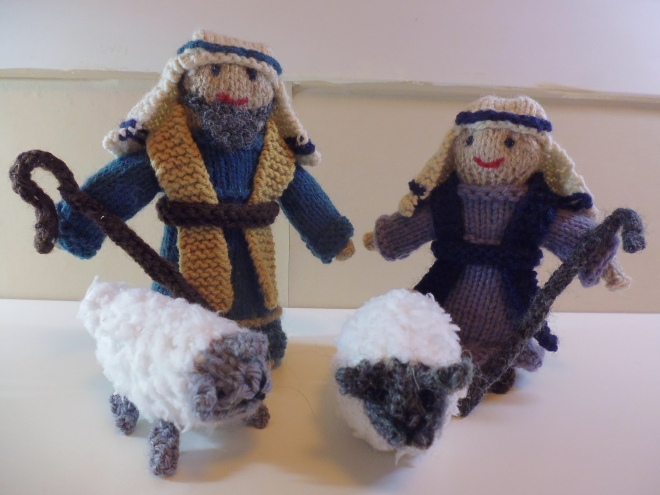 Shepherds watching their flocks by night…

After the animals, these guys are my favourites.  I love the little beards and the gold crochet yarn that gives them that ‘je ne sais quoi…’.  Even the presents are cute – these were pretty fiddly to knit but they’re great, especially once I’d put a couple of beads on.  My absolute favourite though is the one on the right… 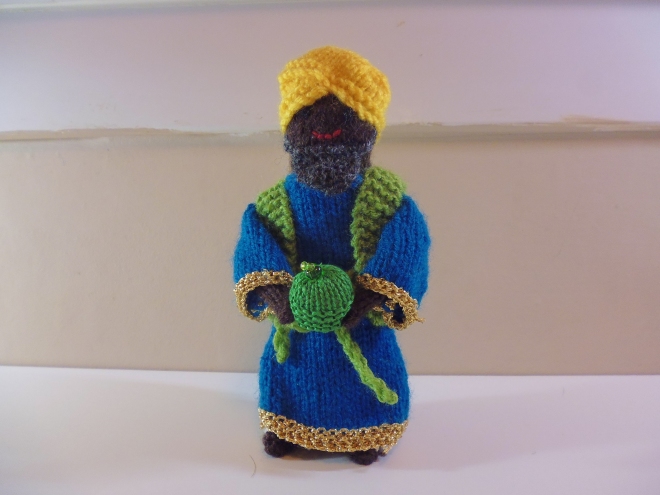 Just look at that turban!

I am glad this slightly epic project is done now, and I can get back to the cardigan I was knitting.  I don’t think it’s the last project of this kind I’ll be doing though, I have the same author’s Noah’s Ark book and am looking forward to knitting tortoises and crocodiles……maybe not for a few months yet though!

This will be a short post, I’m on a Christmas-related deadline…..more on that further down…..

In the knitting world you’ll often hear people talk about being ‘process’ or ‘product’ knitters.  The former being someone who chooses projects based on the process – whether it’s wanting to knit a certain cable pattern or try a new shaping or construction method – without really caring whether it’s something they’ll wear or use.  As opposed to the latter who will identify a gap in their wardrobe, or a specific gift for someone, and find a pattern to get the product they want.  When it comes to knitting I’m definitely the former, and I’m beginning to suspect the same tendency in my dressmaking.

This dress is a case in point.  It’s the Jasper dress by Paprika Patterns which is designed for sweatshirt fabrics.  I fell in love with the look of the pattern – the princess seams, welt kangaroo pocket and that big collar with the tab.  Unfortunately I ignored the fact that I get too warm.  All the time.  As a result, I have a really nice dress that I can only wear at home (we only have heating on in one room), or outside. 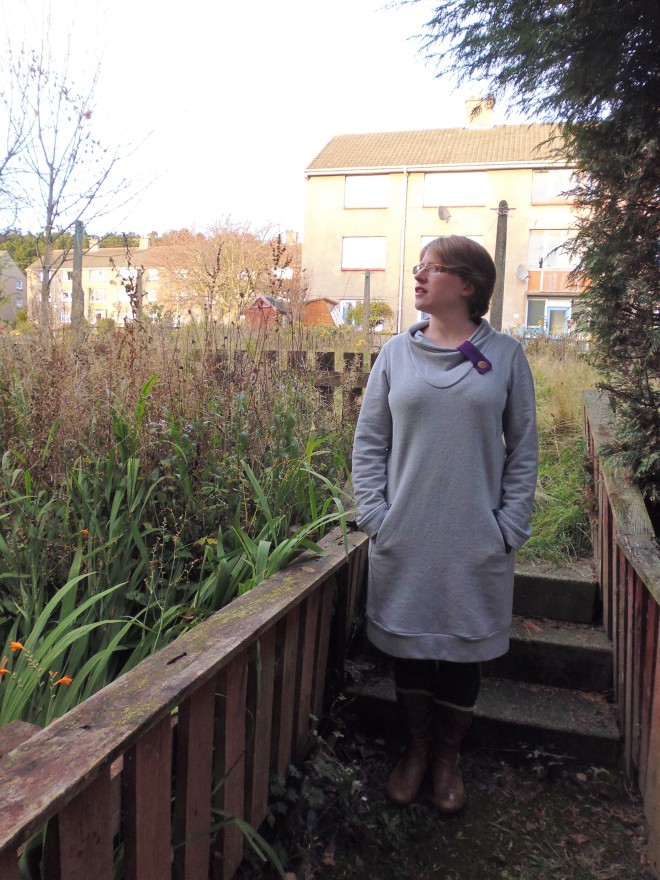 I wore it to the supermarket one Sunday and just about died of heat exhaustion.  The fatal flaw is, of course, that whilst you can wear a layer under a sweatshirt, and remove said sweatshirt if you go into a building that’s overheated (ie anywhere over about 17°C / 63°F), you can’t really do that with a dress.  Not without scaring small children, anyway.

The fabric was from Fabricland (great shop, terrible website….although at least it’s not flourescent yellow anymore) in Bournemouth, I bought it specifically for this pattern last time we were down south.  It’s a loop-back sweatshirt fabric (it’s called tracksuiting on the website…they have a lot more colours online now than when I was in the shop) and is really nice and soft.  It’s a nice weight too, with a bit of drape which I like but enough body to hold the collar and skirt shapes.  The purple tab, welts and pocket lining are cut from scraps left from my Lola dress – a bamboo/cotton french terry. 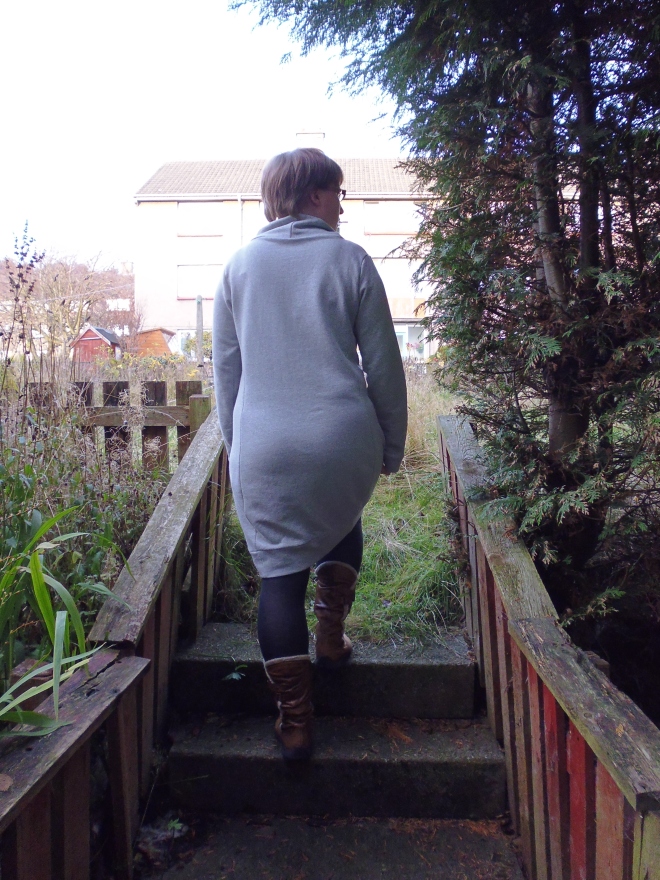 You can just about see the princess seam shaping on the back here.  This version is a little bit too big, I think, but it’s super comfy and seeing as I can’t really wear it out and about that’s not the end of the world.  I went with the larger size range, designed for a C cup rather than a B, but I was right in between the two different ranges and I think I could afford to size down if I make this again.

I actually love this dress, even though it’s effectively pyjamas / ‘loungewear’ – there must be a better word than ‘loungewear’ but I can’t think of one right now!  Of course I couldn’t actually wear it as nightwear, guess what, I’d be too hot.  I bought some fabulous grey / navy double-faced wool jersey at the Knitting & Stitching show in Harrogate a couple of weeks ago and would love to use it for another version of this – I’m trying to resist though because this is a fabric that deserves to shine, not only for wearing at home.

I’d better get back to the sweatshop now, I’m knitting a nativity (or Knitivity) for my parents church.  I’ve got to finish a shepherd boy, an angel’s dress and then knit and finish three wise men.  All before Christmas Eve.  I’ll blog once all the figures are done, but here’s a sneak peek at Mary.