I almost decided not to share this particular project.  Whilst not an absolute disaster, this pair of jeans is decidedly less than perfect….but I realised that everyone likes to read about other people’s misfortunes and thought I would brighten your day with mine! 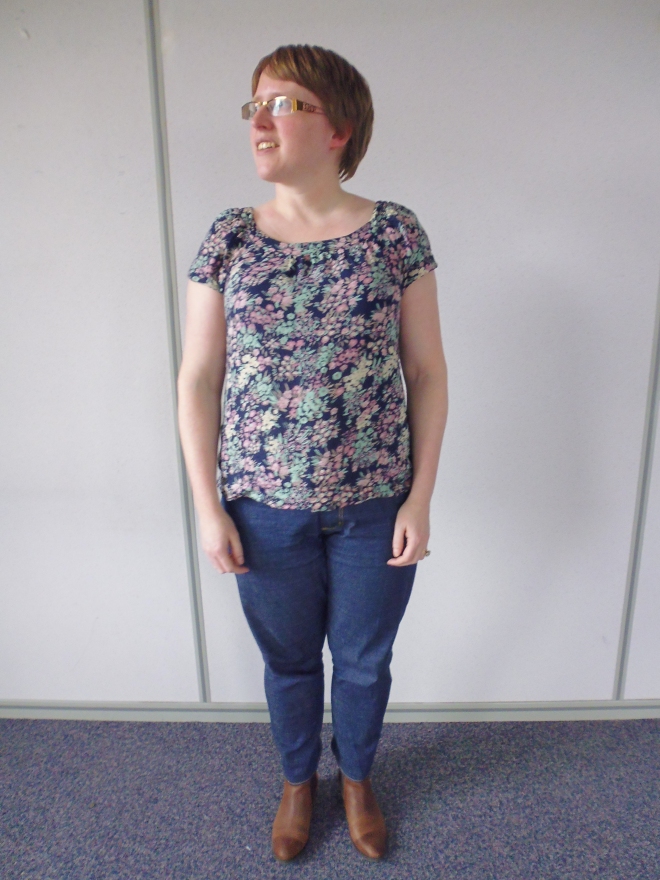 There are some definite fit issues, some user error and a slightly iffy fabric choice, but despite all that they are wearable.  The pattern is the Hot Patterns Boyfriend Jeans.  I love men’s jeans, my favourite pair of jeans for most of my 20s were a pair of men’s Levi’s – can’t remember the number – which eventually fell apart.  So these really appealed to me – they have a straight side seam and suggest using a selvedge denim to give that menswear look.

Let’s start with the fabric choice, shall we?  This is a pretty lightweight, stretch denim with an interesting, slubby texture.  It came from Les Coupons de Saint-Pierre, as a three metre ‘coupon’ or pre-cut length.  Being short, I knew I would be able to get two pairs of jeans out of this stuff, especially as it’s 150cm wide – I’m saving the remainder for another pair of high-waisted skinny Gingers.  It’s a really nice fabric and seems to have pretty good recovery, and should be perfect for that pattern.  I thought it would be ok to use for a wearable muslin of sorts for this pattern – I do have some rather lovely, dark, dark indigo selvedge denim for a ‘good’ pair of these.  This is slightly too lightweight, though, and I think a heavier denim would hang better and reduce the weird twisting effect slightly. 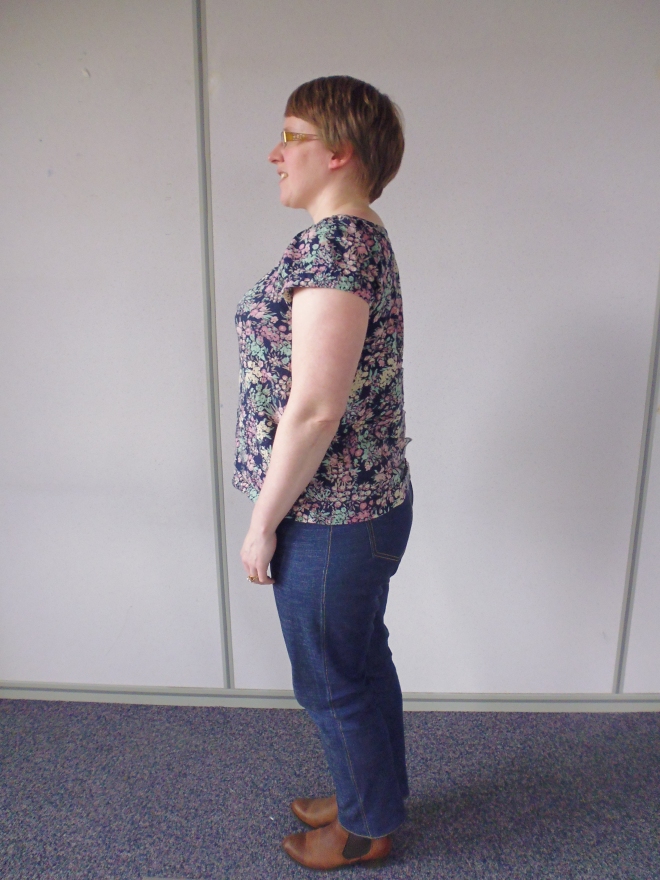 The side view isn’t too bad – although you can see that they are slightly too short, which is where user error comes in.  The pattern gives about 3 million different measurements for each size, one of which is the height it’s drafted for – based on this I shortened the leg pattern pieces by 5 cm before cutting out, but I think I should have left them as they were.  I drew a line perpendicular to the grainline / side seam, but given that these have an almost dead straight leg I would have been better just taking out any extra length at the hem once they were put together, there’s no shaping to speak of that needed to be preserved.  Not sure how my legs have suddenly grown though, I am definitely a good 5cm shorter than the height given…….!  Other than shortening them I made up a straight size 14 (I think) and basted them together to test the fit, but only after I’d sewn the centre back seam and installed the fly front – another bit of user error, I just completely forgot to do it earlier. 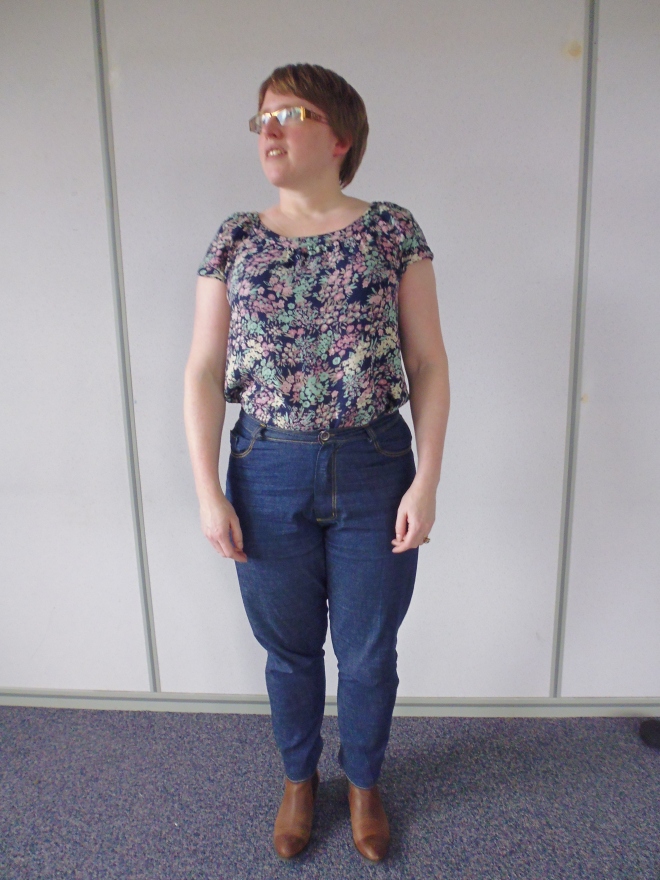 There were two main fit issues, one of which I fixed, if slightly over-zealously, and the other which is better than it was but definitely not quite right.  As with the Ginger jeans I found I needed to take a chunk out of the waist.  Unfortunately with the centre back seam already sewn and topstitched I had to take in a wedge at the top of each side seam – I’m way too lazy to unpick all that topstitching.  I’m not sure but I think this probably also has something to do with the twisting.  I also took in a little bit too much, and the waist is now quite snug.  Next time I’ll do what I’ve done with my Gingers and take a wedge out of the centre back instead.

The other fit issue is the crotch, as you can see.  When I basted for fit there was an enormous amount of extra fabric in the crotch area, right through from front to back.  Following some……careful…..pinning of the relevant parts I took in the centre front and back seams and the in-seam which has helped, without entirely solving the problem. 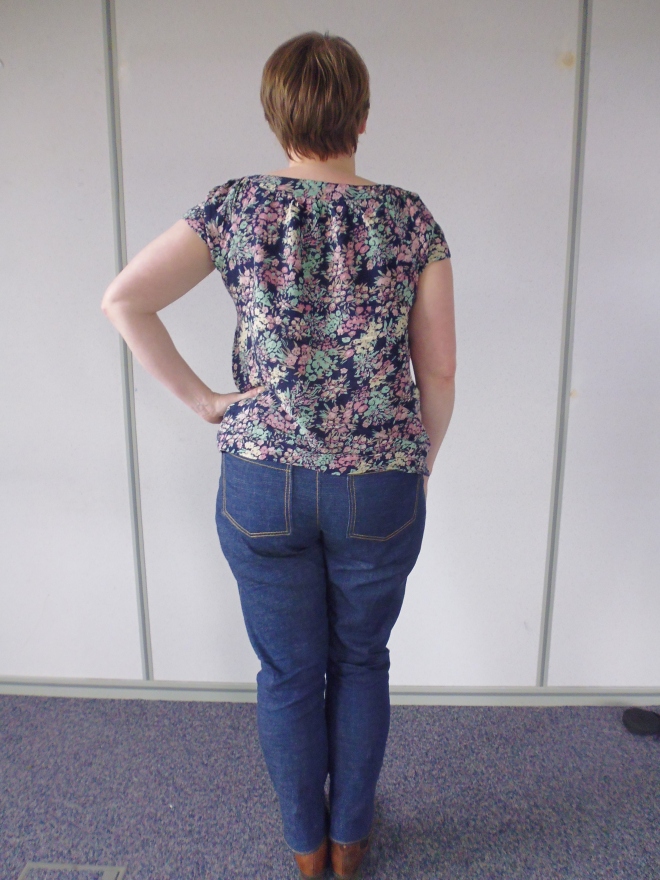 The back view is better, although I’m thinking the pockets might be a little bit too big for me.  Most of the creasing here is down to the fact that we took these pictures in a sneaky 5 minute break at work to catch the light (thanks Nic!) and I’d been wearing them all day at my desk.  They are dead comfy which is nice, and as usual my colleagues were completely oblivious to all the not-so-great-bits that I can see….it does help that my top is long enough to cover most of the crotch issues – as are most of my tops actually.

Here’s the back view with my top tucked in – you can see in this picture that the waist is what they call here in Scotland ‘neat’, ie not exactly way too tight but definitely on the snug side.  I’d never heard that use for the word before I moved to Edinburgh, so I’m assuming it’s a Scottish thing anyway.  There are all sorts of words like that which besumed me slightly in my first few months living here.  My favourite is using ‘juice’ for pretty much any soft drink……it’s very disconcerting to go to a party and be offered juice to drink, expecting orange or apple juice, maybe even something fancier like a pineapple or cranberry, only to discover that the options are actually Irn Bru or Coke!  There are some distinguishing adjectives that get used – we drink a lot of diluting juice (squash), and even ‘cooncil juice’ (water…!).  Oh, and if you want actual orange juice in a bar you ask for ‘fresh orange’.  Even if it’s from a Schweppes bottle and is quite some processing distance away from an actual fresh orange.  As I say, endlessly bemusing to an English girl in Edinburgh.

Back to the jeans…..I realised just as we were about to start with the photos that I was accidentally incredibly co-ordinated……the fabric I used for the pockets, waistband and fly shield was the scraps from the top I’m wearing.  It shows how awake I was when I got dressed that I hadn’t realised…..!

The innards – unlike the Ginger jeans, this pattern ends up with the right side of your pocket fabric being inside the pocket, rather than being visible on the inside of the jeans.  It also has you construct the fly shield from interfaced lining fabric – I actually really like this touch, I think it’s fun to have a secret flash of colour behind the fly front.  Here’s what it looks like from the outside:

Every time I do the zip up it makes me smile….definitely something I’ll repeat in my next pair.  Sewing the fly front from the instructions provided proved a bit baffling.  They have you baste the zip to the fly shield to start, and I could not work out which way round it was supposed to go – my first attempt resulted in the fly shield ending up on the outside, and after unpicking and basting about three more attempts I gave up and turned to the Ginger jeans fly instructions.

I decided to go for the classic gold topstitching, and I like how it’s turned out.  This pattern also has you topstitch the full length of the side seams, with no topstitching on the inside leg seams – I think I might actually prefer this way round.  I was particularly pleased with the pocket topstitching, again I tried to take my time a bit more than usual.

This picture also shows the texture of the weave in this fabric – I really like the slubby lines of paler thread.  I also topstitched around the waistband, the instructions don’t mention it but I felt it needed the structure this provides in this lighter weight fabric.

I have been wearing these, despite their imperfections, although I do find myself reaching for my grey skinnies first in the mornings.  I’m not quite sure though what my next steps are in terms of cutting into my lovely selvedge denim.  I think I might have to dig out my copy of Pants for Real People and see if I can work out what’s causing the crotch issues.  I’ll probably try using a heavy weight striped linen which has been marinating in the stash for ages to make another muslin – it’s a more similar weight to the good denim and will hopefully be more helpful in terms of fit.  I think I might be about to join Heather of The Pug & Needle in her quest for the perfect jeans…..