I’m not usually a planner.  At all.  Odd for an accountant, apparently, but I do like to think of myself as not a ‘real’ accountant, personality wise…..!  Generally, if I’ve planned what I’m doing at the weekend by Friday lunchtime, I’m ahead of the game.  Drives my mum mad…. Anyway, despite my usual aversion to planning, I’ve recently decided to try and plan out some of the sewing projects I want to tackle – it means at least when I only have half an hour, I can get stuck into something rather than dithering.  I do a lot of dithering, so anything to minimise it is a good thing.  I have a very low-tech solution – just a small chalkboard – but it works for me.  Unless, of course, I decide to go off-piste – which is exactly what happened with this pattern.  It’s the Athena Top by GrayDay Patterns, I saw a version on someone’s blog – as usual I can’t remember who – and had it printed and traced within about 3 hours.

I love this top!  It’s the size M, in a very fine viscose jersey I got from this lovely shop.  It’s a gorgeous colour and the fabric is a dream to wear, and drapes beautifully – very important for this top I think.  It’s really comfortable but looks a little bit more special than just a plain t-shirt.  Fit-wise, if anything, I think this is slightly too big – but it’s definitely wearable.  In fact I’ve worn it pretty much as soon as it’s come out of the wash ever since I finished it.  The back is just as nice as the front, I really like the way it sits.

This was a really quick sew, there are only 4 pattern pieces plus bands for the neck and arms, and the fabric wasn’t anywhere near as shifty as I’d feared it might be.  The hem is twin-needled – it looks a bit wavy in a couple of these pictures but I think that was because I was very lazy and didn’t iron this before taking photos…..

The pattern was generally clear, there’s not much to the construction to be honest, but I did find that the length of the sleeve seams didn’t match, and the notches didn’t really match up either.  I just fudged them and did some trimming and it worked out fine – I thought on this top that it was probably user-error rather than a fault in the pattern, but I’m not sure about that now – I’ve now made this pattern three times, paid particular attention the second and third times and still had difficulty matching things up.  It hasn’t detracted from the tops though so it’s not a big deal.

Having made and loved this top in a knit fabric, I thought I’d try out the woven version as well.  Because the knit version in a M was slightly on the large side, I thought I’d risk not sizing up at all which was definitely the right decision.  This version is possibly also verging on being slightly too big…

I love the way this drapes in the woven fabric – it’s a wool-viscose blend (I think) from the same shop – I don’t think I’ve ever been in there without buying something on impulse…..luckily we moved offices, it was a 2 minute walk before and bad for my stash-management efforts! 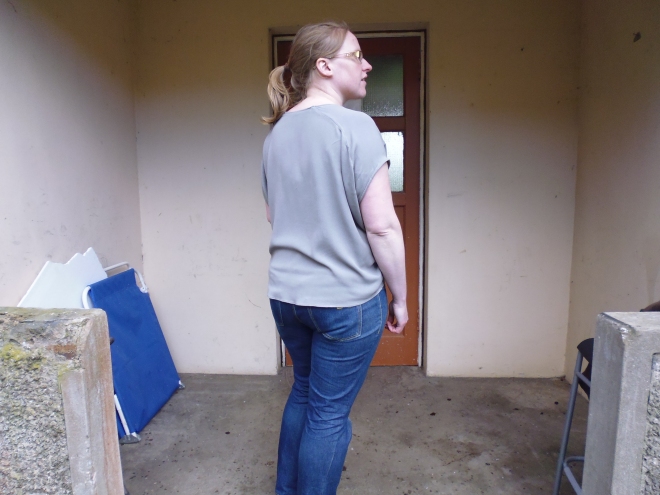 I liked this so much in a woven fabric I decided to break out some ‘special’ fabric – a beautiful brown sandwashed silk that I bought on honeymoon in Italy.  This stuff is like butter….

Probably the wrong bra to have worn for this photoshoot but never mind.  For this version I decided to go down a size to the S, a good decision I think.  The one thing I might change in the future is to use the M length at the front – this is just that tiny bit too short for comfort with lower-rise jeans.  It’s not a big issue though, I absolutely adore this top.  I’m always nervous about using those extra-special fabrics, it’s that worry that whatever you make might not be as good as just having the fabric there to stroke….but this top lives up to all my expectations.  Even the insides are lovely, with french seams everywhere and bias binding at the neck and armholes. 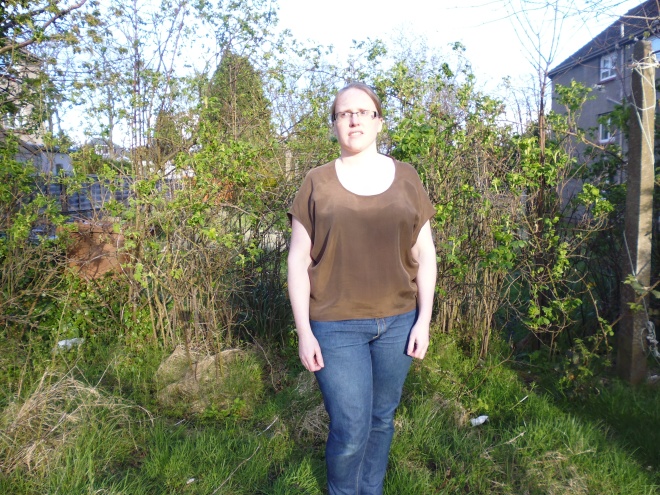 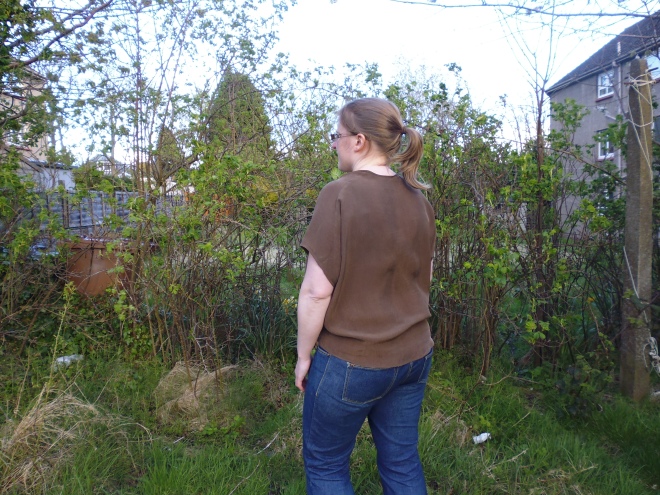 6 thoughts on “An Athena top….or three”